The Great Famine and the Black Death

THE GREAT FAMINE AND THE BLACK DEATH

The 14th century was a difficult period for Kibworth Beauchamp, Kibworth Harcourt, Smeeton Westerby and indeed the whole country. 1314 saw the start of the Great Famine, followed by The Black Death in 1348, with both leaving a trail of death and economic problems for the three villages.

During 1313 severe gales caused havoc in the villages damaging buildings, hedges and trees. Hard frosts in the first months of 1314 persisted until April followed by a hot dry summer which baked the ground resulting in a poor harvest. Autumn brought torrential rain and this extreme weather persisted throughout 1315 and 1316 leaving crops rotting and dying in the fields. Livestock suffered through the lack of animal fodder. This resulted in a severe shortage of food stocks and increased prices adding to the hardships engulfing the villagers. These food shortages persisted into the next decade. The death toll from the famine was approximately 10% of the population along with a severe damage to the economics of the villages.

The Kibworth Harcourt accounts for 1315 to 1318 show increasing rent arrears with the number of poverty-stricken tenants forced to give up their land increasing from 6 to 40 a year.

The Black Death was a bubonic plague, caused by the bacterium now identified as Yersinia pestis, which originated in Asia around 1346 spreading across Europe to reach England in the summer of 1348. The plague spread throughout England very quickly leaving a trail of death in its path.

During that summer rumours, possibly through Kibworth Harcourt’s association with Merton College, Oxford, began to circulate in Kibworth of a terrible pestilence. Later that year the plague reached Leicestershire and arrived in Kibworth at the beginning of 1349. 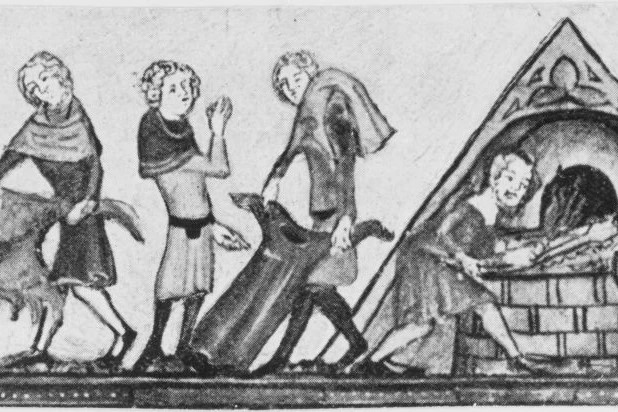 The court roll only recorded deaths of landholders and tenants.  The deaths of women, children, labourers and those not owning any land were not recorded.

Kibworth had the heaviest known losses from the Black Death of any English village and whilst the figures are not absolutely accurate, with some records lost, the death toll for Kibworth Beauchamp, Kibworth Harcourt and Smeeton Westerby was about 500. The mortality rate from the Black Death in England was estimated at 40% and when compared to the estimated mortality rate in Kibworth Harcourt, at least 70%, indicates that the village was far more severely affected than most. There appears to be no explanation for the disparity in these mortality figures.

The Kibworth Harcourt court rolls from this period, held at Merton College Oxford, give an indication of how the villagers tried to keep things running as near normal as possible, vacant tenancies were filled, new village officers appointed, and children whose parents had died and were too young to tend their parent’s land were[D1] [D2] [D3] [D4]  cared for.

With the heavy death toll disposal of the bodies was a problem and open mass graves known as ‘Death Pits’ or ‘Plague ‘Pits’ were utilised.

By the end of 1350 The Black Death had begun to abate.  However minor outbreaks of the disease appeared over the next few years and continued into the early years of the 15th century.

Having to cope with the deaths of so many relatives and friends had a large impact on the people who survived the disease.  This coupled with the damage to the economies of Kibworth Beauchamp, Kibworth Harcourt and Smeeton Westerby, had a severe effect on village life over the next few decades.

The Story of England by Michael Wood

The BBC Magazine 11th June 2020, ‘On how pandemics shape society’ by Michael Wood