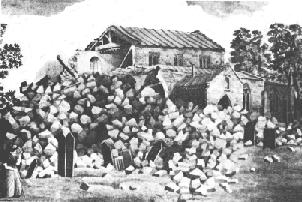 The awful event which has recently taken place at Kibworth, Co. Leicester, together with the causes that led to it, having been previously represented, I deem it proper to request your insertion of the following particulars authenticated by my own personal observation.

At 9 o’clock in the forenoon of Saturday last (Ed. 23rd July, 1825), the ancient and venerable tower and spire of Kibworth Church fell to the ground. Various symptoms of decay, about the lower part of the S.W. angle, had been discovered, and partially remedied, above 2 years ago. The originally defective materials having, since that period, more visibly yielded to the pressure of the superincumbent mass, Mr. Wm. Parsons, of Leicester, was called in about a month ago to inspect the state of the tower, and, under his direction, the masons had made considerable progress in the work of reparation. On Thursday last, however, the fissures and which had appeared in numerous places - were found to have increased in so alarming a degree, that Mr. Parsons was again summoned without loss of time. On his arrival on Friday morning, he ordered that the tower should be propped with inclining beams, till permanent support could be given, by removing all the decayed parts and supplying their place with strong masonry. The carpenters began their operations on Saturday morning, but were almost immediately compelled to desist. Violent disruptions in various places, accompanied by threatening sounds were now incessantly going on, and the site was left to its inevitable fate.

A short time before the final event, I had been informed at the Rectory that Mr. Oldfield, who had just arrived from Leicester, for the purpose of beginning to paint the pews, desired to see me at the Church. Unacquainted as yet with the imminent danger, of which Mr. Oldfield had been equally ignorant, I immediately went to Church, entered at the Chancel door, advanced towards the West end where the mischief was gathering, heard the noises before mentioned, suddenly retired by the same door, proceeded round the East end towards the North gate of the Church yard and there found the different workmen with a few other persons intensely watching the steeple, and, as they told me, every moment expecting its fall. I took my station among them, and in less than a minute after several premonitory crashings, the whole fabric bowed from the summit over the base, paused for a few seconds, and then, as with one collective effort, came down in a thundering cataract of ruins. A thousand years could not efface the impression made upon soul and my senses by the grand, the astounding catastrophe.

Through the immediate and most merciful interposition of God’s providence not a life was lost, not the slightest bodily injury sustained by human being.

Praise be to His Holy Name!