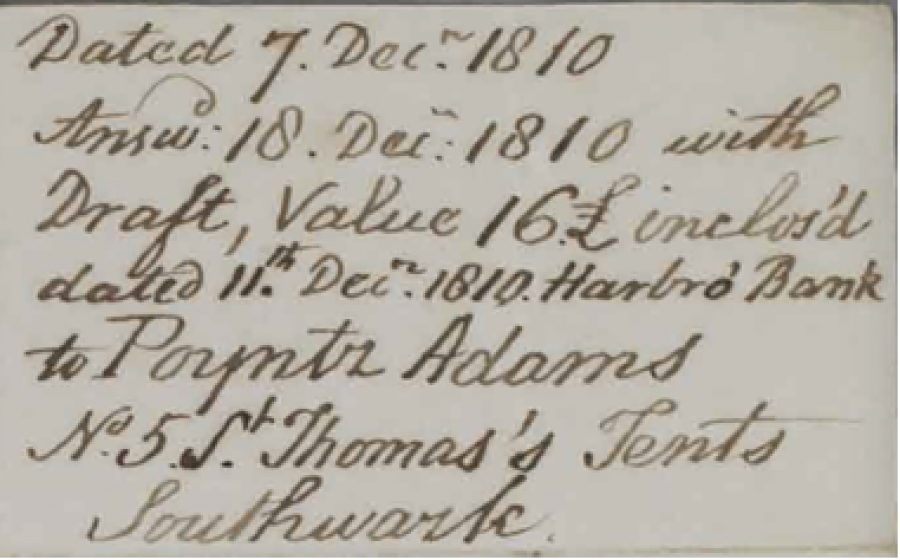 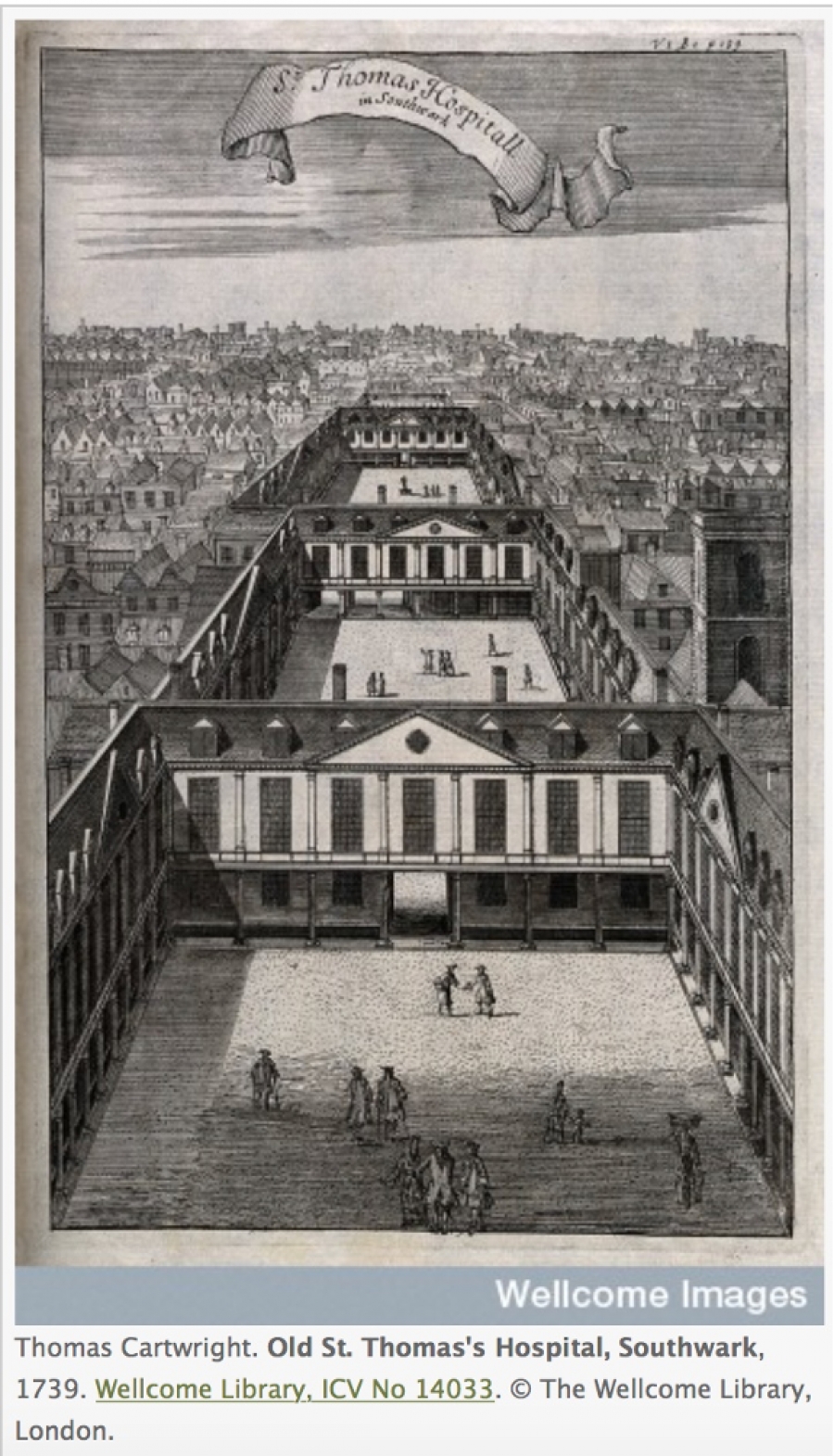 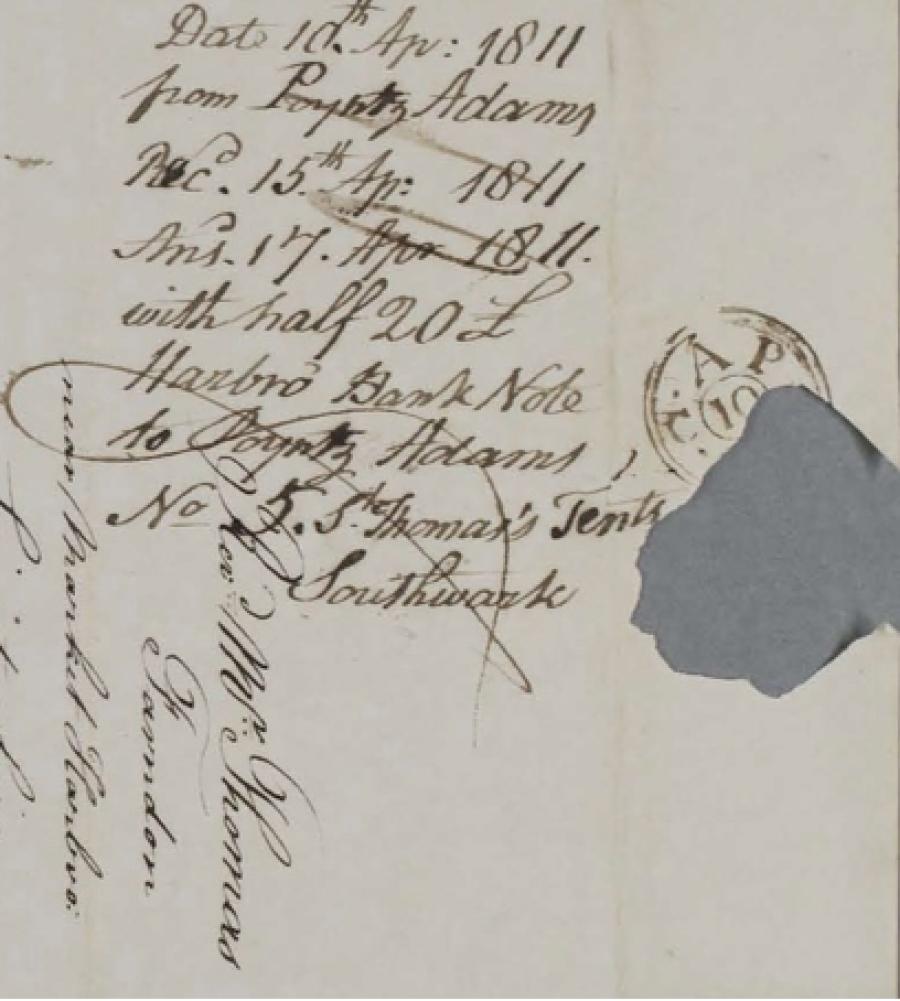 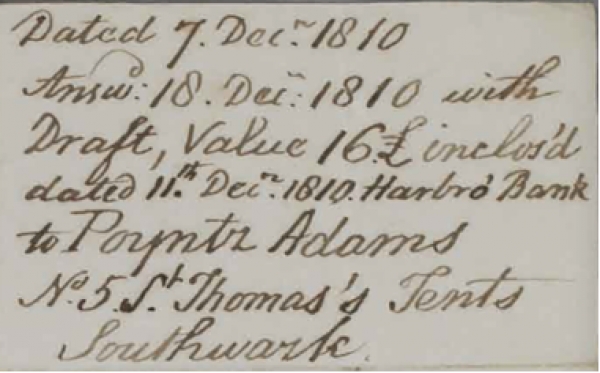 May 1811 Dr Poyntz Adams left London to set up as a general practitioner in Chipping Sodbury, Gloucestershire. His career as a country practitioner was ahead of him with a set of expensive instruments bought for him, by his uncle Rev.Thomas Thomas.

In a letter from Poyntz Adams at 5, St Thomas’s Tents, Southwark to his uncle.

‘I go to church every Sunday and it is Mr Neve who does duty, his wife called to see me about a poor woman that I am attending. I have got already twenty -six patients on my books.
I have not had any midwifery yet, but I have been spoken to by two persons who live about four miles from Sodbury. Mr Drayton, surgeon called upon me last week, he has no doubt but I shall do very well. He left this place eighteen months ago; the reason he left was on account of the prejudices of the people was so much against him on account of him becoming an anabaptist while he was at Sodbury. The population of Sodbury was taken three weeks ago and it amounted to twelve hundred and thirty five including women and children.’

Mr Hetling writes to Rev Thomas Thomas. He says he has visited Poyntz Adams in Sodbury and that he knows that Poyntz’ s brother has already conveyed,

‘the occurrences that have lately happened to Poyntz to you - I am not yet sufficiently master of the circumstances to be able to give you correct information on this misfortunate business. Poyntz acquainted me that his brother Mr John Adams had threatened to make him account for all the monies he had received from you … whenever he should have it in his power… and that he had shown a most unbrotherly spirit towards him.
He also stated that this brother had shown him a copy of all the various sums that had passed principally through my hands from you to Poyntz….
I lament to find such family discussions between brothers- but I lament more particularly that your feelings and goodness should have experienced so great a disappointment with respect to your nephew Poyntz -
I hope he will be enabled to justify his conduct…

‘It was with infinite concern that I found by Mr Hetling a few days since that he had received a letter from you respecting me of an unpleasant tendency which grieves me exceedingly and I fear some cruel foe has prejudiced your mind against me without any cause whatsoever. I can assure you upon my honour that no man can exert himself more than I do and I do not doubt of ultimate success provided you Sir, will kindly do what I was led to expect and depended upon; viz to discharge my druggist and glass bills and pay for my board unto next May; afterwards I will take myself upon my own hands and be no longer an incumbrance to you.

‘I belong to a Friendly Society established in this town and after Whitsuntide next I expect to be the surgeon which from the number of members and the respectability of many of them I consider as likely to afford me considerable benefit more from the connection which it must necessarily create than the amount of the salary attached to the situation.’

‘For my industry and carefulness I beg to refer you to any gentleman you may think proper to select. I am truly grateful for your past and present bounty and kindness and assure you that if my future success in practice may enable me, I will repay you with very thankful acknowledgement all my heart can dictate.’

‘Enclosed you will find the total amount of the druggist and glass bills and what money I have received from you off Mr Hetling and what my unpaid medical bills amount to and what I have received. Since Mr Hetling received your letter I have not had anymore drugs nor shall I until that gentleman receives a letter from you.’

‘Respecting midwifery I do but very little as yet but hope after a short time I shall have more. That branch of the profession requires for the patient to have confidence in a practitioner and age- Hoping for a continuance of your kindness
I remain, dear uncle, your dutiful nephew Poyntz Adams

September 29th 1816 Poyntz is writing again from Chipping Sodbury to his uncle saying that he has heard from his brothers’ solicitor.The brothers are ‘wishing the sale of the Kibworth Estate’. He continues by saying that ‘ he has not the least objection and shall be happy to leave it entirely up to you, hoping you will do the best for me and whatever deed you may wish me to sign when they are presented to me -I will do it immediately.’

Whether that letter precedes or post dates the following I do not know. 1816 we find that Poyntz’s practice in Sodbury has not gone well.

‘By order of the court for the relief of Insolvent debtors - the petition of Poyntz Adams, late of Chipping Sodbury, Gloucestershire, surgeon now a prisoner for debt in the King’s Bench prison, in the county of Surrey will be heard at the Guildhall in the City of Westminster on the 24th of July next, the hour of 9 o’clock in the morning and that a schedule containing a list of all the creditors of the said prisoner annexed to the said petition is filed in the office 59, Millbank Street. Westminster to which any creditor shall give notice in writing.’

It would seem that making one’s way as a general practitioner was not a happy one. And that ‘Patronage’ as he states many times, is hugely important at this date. Poyntz married Mary Stain on the 10th March 1822 at Stoke Albany, Northamptonshire.

During these years Poyntz Adams continued to practice successfully at Stoke Albany. Rev.Thomas Thomas his benefactor and uncle had died in 1826, perhaps disappointed in his young surgeon nephew and leaving him some money. Ten children were born.

However, it’s a fact that many young surgeons struggled to make ends meet; hence Poyntz, his wife and large family decided to emigrate to the Cape, South Africa as colonists in 1842.

Their eldest daughter Jane was pregnant by a man named Dewey and she gave birth on board ship to a daughter. By going to South Africa they escaped the social stigma and were able to make a good new life and fresh start in the Cape.

1843 1st July Poyntz wrote to England for permission to practice as an Apothecary and Chemist. In reply to his request, it was recommended that he be given a license to act as a Chemist and Druggist.He was able to make his livelihood in that way in Uitenhage.

Poyntz also writes about his father Robert Adams 1748-1811 and his brother Robert who are unaware about how he is financing himself and who also seem to have problems of their own.

1811 April optimistically writing to Rev Thomas in reply,
‘In answer to your request respecting Robert carrying on the business with the machine; that business has been totally at a standstill for some months as the inventor has not made a complete agreement and is not likely to without law.
My father is well satisfied that he must be paid for loss of time. As such Robert has been at Father’s expense the whole of the time.’

‘This last month Robert and father have been engaged as agents in chartering and collecting freight for ships, and have been very successful with engaging charters for three vessels to Quebec to load with timber and have one more on hand. The owner of the last reckons to make £200 for the voyage the largest £3000 Father and Robert’s commission on the above 2% but it is customary not to be paid commission until the ship returns - the stamped charter party between the merchant and owners of the ships are left in Father’s and Robert’s hands.’

Thank you for your kind assistance in my present unfortunate situation.. and also for your advice to place my trust in the Almighty as it will punish me in my present confinement for my follies to bring me to a more desirable end. And return thanks to god for my recovery of my illness when I was given my surgeon (Mr Sowdon) and also the physician Dr Black Hall
who are considered great men. Please thank my father for sending me £10.
This kind assistance and support though my serious illness bears deeply on my mind.
It is not in his power to do more for me.
His wish is for me to return to London when I am released from this place and he further writes me to leave my doctor’s bill £5.4s 6d unpaid. That would distress me for he paid me such great attention- but let my inclination be ever so honourable; if I have not got it myself what to do, my character must submit… I will repay you immediately it is in my power with a grateful heart.

When I am discharged from this place I shall be free from debt or embarrassment whatever and also from this grateful transaction for which I am placed.

My father has no doubt explained to you the confidence I placed and how I have been deceived and also my intentions of going abroad when I was arrested out of the ship - the whole of my apparel except what I stand up in gone to New Zealand as the captain of the vessel would not allow me them - and having been confined within these dismal walls five months my clothes are totally worn out - not even a change of linen and without some charitable soul will come forward to assist me with a suit of clothes, I am not fit to leave these walls to enable me to obtain some employment - knowing full well it is not in the power of my father to assist me.
Those inclinations may be ever so great and wishes to serve me in my present distress- if you think me worthy of your attention and charitable assistance and forgive me for my late conduct and follies and let my future transactions prove me worthy of your assistance which I shall leave to your own goodness and charitable inclinations and shall remain here until I receive your answer as you think proper for a forgiveness for my follies and conduct which I place my trust in almighty god for to relieve me from this dismal place and plant my thoughts and actions for a better purpose for the future.

Once again Rev.Thomas Thomas saves the day as he has done so often with helping out his family with continuing huge financial support.
This is a testament to the true Christian spirit.

Poyntz was named after his ancestor Newdigate Poyntz of Dogsthorpe born 1608.
Newdigate married 3 times and lived most of his life at Benefield, Northants.
He was a captain in Charles 1 army and he was killed at Gainsborough in August 1643 whilst fighting Cromwell’s parliamentarians. Newdigate’s name rose to public attention in the early 1980’s as he had a blood connection to Princess Diana.
Diana was descended from Newdigate Poyntz by his third wife Mary Parkyns.