Alonso Joseph Freeland was born in the village ofAngmering in West Sussex on 25thFebruary 1856. He was the youngest of five children born to Henry and AnnFreeland.Onleaving school in Angmeringhe worked for his father in the family grocer’s shop wherehe was described as a chemist/dentist.

Alonso married Mary Mason Holyland on 3rdDecember 1884, and Alonso and his wife moved to Kibworth soon after their marriage. Their move to Kibworthmay have been due to the availability of a chemist shop in Station Street which had previously been owned by William Brown. 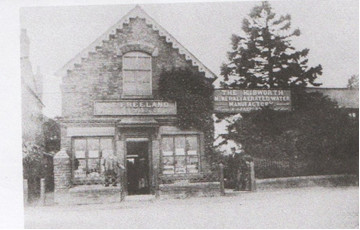 He started a business as a pharmacist, dentist, manufacturer of mineral waters and soft drinks.These were produced in aseparate building (since demolished) adjacent to his shop.

Using his skills as analytical chemist he would be called upon to identify poisons and similar substances and give expert opinions on them, an early example of forensic science.  In 1896 he was appointed as the analytical chemist for the Market Harborough Urban & Rural District Councils.

He also practised as the local dentist where for a small sum he would extract a decaying tooth.

The business expanded into production of medicine and this advertisement for ‘Freeland‘s Cough Killer’appeared in the Leicester Chronicle on 26th January 1889.

Newspaper image © The British Library Board. All rights reserved. With thanks to The British Newspaper Archive (www.britishnewspaperarchiveco.uk)

Alonso Freeland was a man of many talents, not only in his professional life as a chemist.He was an accomplished musician, playing the violin and piano, conducting and singing both in groups and as a bass soloist.  He was also a proficient photographer and writer.

As a photographer Alonso took, developed and published photographs of images in and around Kibworth.  Many of his photographs have survived and added to the visual history of the area. Two examples are shown below: 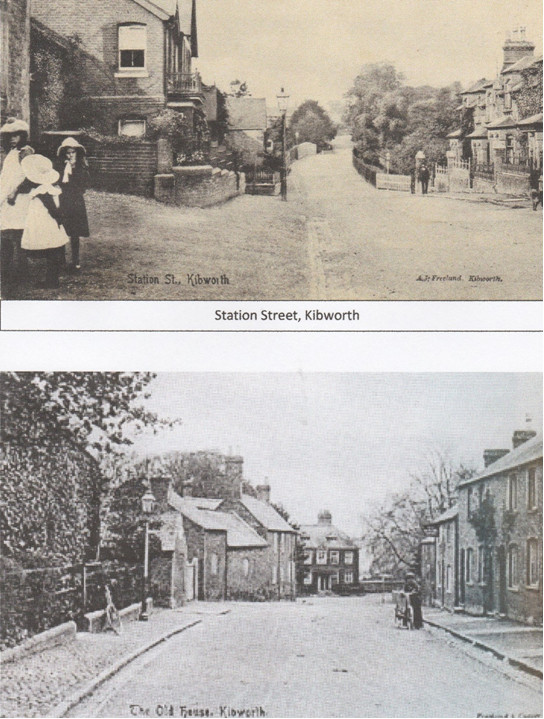 He wrote and published poetry, sonnets, lyrics, popular songs, and hymns. He wrote a number of poems about World War l.(His poem“ON WITH THE KHAKI.” is included at the end of this article)  Some of his work can be seen at the Leicestershire Record Office in Wigston.

In 1905, Alonso had three adjacent houses built in Weir Road, Kibworth Beauchamp, named ‘Angmering’, ‘Sussex’ and ‘Brighton’ no doubt as a reminder of his young life in Sussex. He occupied one of these houses before he retired.

Alonso Freeland retired in 1923, he and his wife moved to Dorset and the chemist’s business passed to a Mr F Bentley.

“ON WITH THE KHAKI.”

On with the khaki, lad, shoulder the gun,
Yours is a claim to Empire's soldier stock,
Who face to‐day the hatred of the Hun
Who bend but never break against the rock.

England expects that every man this day
Will give his honour and his strength to hold
The glory of her records in the fray,
The spendour of her victories untold.

How must the blood course white‐hot through your veins.
As hour by hour your brothers rise to fame,
Men who have fought on battlefields and plains,
True to the land that gave them birth and name.

Now is the option yours, to emulate
The deeds of men who one short year ago
Walked by your side, 'ere Huns stood at the gate,
See Belgium perished in its overthrow.

On with the khaki, lad, that he your friend,
May know your friendliness to him was true,
Show him and all the world that victory's trend,
Lies on the road pursued by him and you.

Then when the day is here that Freedom's foe,
Has fled before the Allies bayonet,
The "Kultured" beast shall have just cause to know,
Another "culture" he may not forget.

When the last German foot has left fair France,
When Belgium lives in peace beneath the sun,
When the Great Bear has stayed his last advance,
Then shall your heart rejoice, in duty done.

Fail not nor linger in this urgent need,
On with the khaki, strike the winning stroke,
See that the world from Prussia's toils is freed,
For your broad shoulders fit no Teuton yoke.

On with the khaki, lad, shoulder the gun,
Brace up the sword for all the heart holds dear.
Soon you shall claim your part in battles won,
And live in peace with soul and conscience clear.